Sacrament of the sick - Housebound

How was sickness viewed in the Old Testament?

In the Old Testament sickness was experienced as a sign of weakness and at the same time perceived as mysteriously bound up with sin. The prophets intuited that sickness could also have a redemptive value for one’s own sins and those of others. Thus sickness was lived out in the presence of God from whom people implored healing.

What is the significance of Jesus’ compassion for the sick?

The compassion of Jesus toward the sick and his many healings of the infirm were a clear sign that with him had come the Kingdom of God and therefore victory over sin, over suffering, and over death. By his own passion and death he gave new meaning to our suffering which, when united with his own, can become a means of purification and of salvation for us and for others.

What is the attitude of the Church toward the sick?

Having received from the Lord the charge to heal the sick, the Church strives to carry it out by taking care of the sick and accompanying them with her prayer of intercession. Above all, the Church possesses a sacrament specifically intended for the benefit of the sick. This sacrament was instituted by Christ and is attested by Saint James: “Is anyone among you sick? Let him call in the presbyters of the Church and let them pray over him and anoint him with oil in the name of the Lord” (James 5:14-15).

Who can receive the sacrament of the anointing of the sick?

Who administers this sacrament?

This sacrament can be administered only by priests (bishops or presbyters). 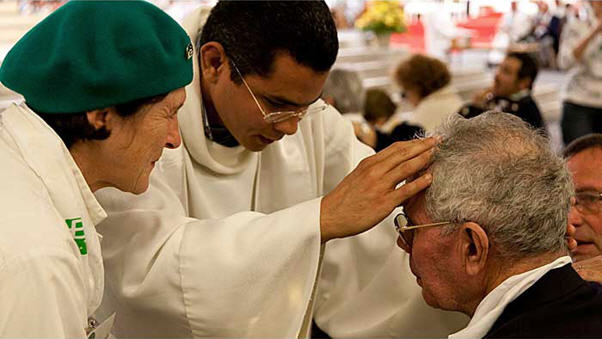 How is this sacrament celebrated?

The celebration of this sacrament consists essentially in an anointing with oil which may be blessed by the bishop. The anointing is on the forehead and on the hands of the sick person (in the Roman rite) or also on other parts of the body (in the other rites) accompanied by the prayer of the priest who asks for the special grace of this sacrament.

What are the effects of this sacrament?

This sacrament confers a special grace which unites the sick person more intimately to the Passion of Christ for his good and for the good of all the Church. It gives comfort, peace, courage, and even the forgiveness of sins if the sick person is not able to make a confession. Sometimes, if it is the will of God, this sacrament even brings about the restoration of physical health. In any case this Anointing prepares the sick person for the journey to the Father’s House.

Viaticum is the Holy Eucharist received by those who are about to leave this earthly life and are preparing for the journey to eternal life. Communion in the body and blood of Christ who died and rose from the dead, received at the moment of passing from this world to the Father, is the seed of eternal life and the power of the resurrection.