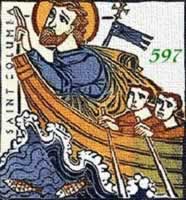 There are three patrons of Ireland, St Patrick, St Brigid and St Colum Cille. Colum Cille was born in Donegal. He came from the powerful O’Neill clan. His original name was Crimthann. ‘Crimthann’ meant Fox. He was a direct descendant of Niall of the Nine Hostages. He could have been called this name because he was red-haired. The name Colum Cille, or Dove of the Church, was his later monastic nickname. Sometimes he is referred to as Columba, which is the Latin for Dove.

In 690 Adomnan, sixth Abbot of Iona, wrote the ‘Life of Colum Cille’ .The second biography is a short one written by an unknown author in about 1160 and known as ‘The Homily Life’. The third and longest was written by Manus O’Donnell in 1532. It was called ‘Beatha Colaim Chille’, the life of Colum Cille.

There were already many monastic settlements in the country at this time. They were centres of learning and holiness. He began his study at the monastery of Moville in Co. Down. This had been founded by St Finian. He later studied at the famous monastery of Clonard, which was founded by St Finian, no relation of the Finian of Moville. In the 540s Clonard was regarded as one of the finest academies of learning in Europe. There he met St Ciaran, who later founded Clonmacnoise. Later he moved to the monastery of Glasnevin where he met many scholars and saints. 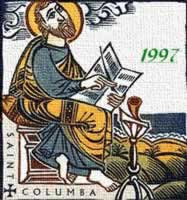 On one occasion when he was at the monastery of Moville he came across Finian’s book of the Psalms. Colum Cille decided to copy it secretly. He did, and when he was brought before King Diarmait who was to decide who was the rightful owner of it, Diarmait made his famous decision: “To every cow its calf and to every book its copy”. This might be regarded as the first copyright case in history! Later fighting broke out about the decision. After a battle for it Colum Cille got it back and it has since been known as the ‘Cathach’ or Battle Book. Colum Cille went into exile as penance and landed in the island of Iona in 563 and there he established his famous monastery. Legend has it that a shrine, (Cumhdach), was made for the Cathach. After the Treaty of Limerick 1691, it was taken to Trance by the O’Donnells and brought back to Ireland in 1813. It is now in the Royal Irish Academy. It is the oldest surviving manuscript of the psalms.

Colum Cille returned to Ireland to settle two disputes. The High King of Ireland was claiming to be the overlord of the Scottish Dal Riada. This meant that they must pay him tax. As no compromise seemed possible it was felt that no one could settle the case except Colum Cille. The other problem was the threat to the liberty of the poets and bards of Ireland.

The meeting was held at Druim Ceat. Colum Cille’s judgement was accepted it both cases. The King of Dal Riada had to acknowledge the status of the High King but was relieved of paying taxes. In settling the question of the poets and bards he said: “For know you that God himself bought the psalms of praise from King David and on that account it is right for you to buy the poems of the poets and keep the poets in Ireland. And as all the world is but a fable, it were for you to buy the more enduring fable rather than the one that is less enduring”.

Like all the Celtic people Colum Cille was very conscious of the Communion of Saints and so had a great reverence for the dead. In his rule for the monastery he wrote: “Perform prayers for the dead with fervour, as if everyone of the faithful who had died were a special friend of yours”.

Colum Cille founded his first monastery in Derry, on the site of the present city of Derry. It became known as The Oak-tree of Colum Cille, Doire Colum Chille, from which the present city takes its name. He soon established for himself a reputation as a scholar of scripture and a poet. The next monasteries he founded were at Raphoe and Durrow. The site at Durrow was given to him by the King of the southern Ui Neill kingdom of Tethbe. Durrow, (Dearmach), means Field of the Oaks. After Durrow came Kells. It was to rival and later surpass Durrow as a centre for piety and culture. The next one was at Clonmore in Meath. Later he founded one on Lambay Island. The site opposite Lambay had a well, renowned for its clear water. He blessed the well, which was called ‘sord’ an old word meaning “pure”. Because of this the monastery became known as Sord Colum Cille from which the town of Swords gets its name.

The original foundation was probably constructed of timber. There is crop mark evidence of the area of the enclosure. It encompassed an area of 500 metres in diameter. The outer enclosure manifests as a double bank. The sculptured High Cross at Durrow has scenes from the Old and New Testaments.
In 563 he left Ireland with a number of his followers for the west coast of Scotland, “wishing to be a pilgrim for Christ”. He founded the famous monastery on the island of Iona. This became a great missionary centre. Colum Cille died there on June 9th 597.

The Book of Durrow

The monastic scholars could write in Irish or Latin. Writing, as they did it, was an art in itself. The Gospels attracted the scribes. They copied them using elaborate decoration or ‘illumination’ as it is called. The manuscript was first located for certainty in Durrow in the period between 877 and 916 when King Flann Mac Mael Sechnaill was king of Ireland. It was placed in a cumdach (shrine), because it was believed to be a relic of St Colum Cille. It was written around 600, perhaps later. After the monasteries were closed down in the 1540s the precise location of the manuscript was not known for certainty although it seems to have remained in local hands. It is now in Trinity College. The book opens with an image of a double armed Cross embedded in a field of interlace and bordered by panels of interlace. It contains all four Gospels.

The Annals of Ulster record for the year 1095 the burning of many churches, among them “Durrow with its books”.