In 1974 when building was still in progress on the new estates in Knocklyon, amenities were more or less non-existent — no street lighting, no shops, emergency phones only and a 49 bus that seemed to come when it felt like it. Shopping trolleys were the order of the day as one had to trek to and from Quinnsworth in Rathfarnham which was the main shopping venue. On Sundays, early residents went to Mass in the Carmelite Convent Chapel on the Firhouse Road, a beautiful little chapel but rather small and quite incapable of holding the overflow of people from the new houses in the area.

The Parish was constituted on the 1st October 1974 and placed under the patronage of St Colmcille. Fr Patrick Staunton was appointed Parish Priest and Fr Seán Dunne, Curate. This was the first landmark in the history of the Parish. The two priests moved into a rented house at 2 Firhouse Avenue (now Knocklyon Avenue). Ballyroan was designated as Parish Church for the area and Sunday Mass was celebrated at 10.30 am. Daily Mass was held in the new Presbytery and the priests also organised evening Masses in the homes of parishioners. This was a wonderful way of getting to know one another, both for priests and people. These evenings of prayer, budding friendships, were like gatherings of one big happy family. This was the start of a community that grew beyond anyone’s wildest dreams.

However, there were many problems to be solved and the first and most important was to find a suitable place in the area to celebrate Mass. Only then could the community establish an identity of its own. A General Meeting was held in Terenure College in November 1974 which 70 people attended and the first Parish Council was elected. A committee meeting was held later that month and the main issues discussed were — a Mass Centre, a School, a Residence, and Fundraising — a Mass Centre being the priority. The ideal solution was found when the Canteen of McInerney’s Site Office was made available to the parish. The first Mass took place there on Sunday 15th December 1974 and this surely was the most important step in the building of this community. The Canteen was a rough wooden building. Early arrivals got a seat on one of the benches all squashed together. The rest of the congregation had to stand. Despite the heat and lack of air the congregation was very happy. This was a place of their own to which they could belong.

It was during this period that the first group of Church cleaners was established. They arrived at 2 pm sharp every Saturday armed with scrubbing brushes and mops, then together with the priests they set about cleaning the Canteen floor. Removing the ingrained mud left behind from the brickie’s boots was a mammoth job, a task which had to be repeated every week. 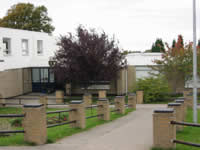 The year 1975 came and week by week more residents arrived. Eventually, there were so many people, the congregation over­flowed into the open space outside. The growing community needed a larger more comfortable Mass Centre. The Parish Committee decided to approach the Finance Committee at Archbishop’s House and ask permission to erect a temporary Church. About this time an unexpected donation of £10,000 was received from a parishioner. The good Lord had come to the rescue again. The visit to the Finance Committee proved successful and permission was granted. The site was purchased and plans submitted for the temporary Church of St Colmcille.

On Sunday, 10th August 1975 the first Mass was celebrated in the new building. Wooden steps led up to the main door where Fr Staunton and Fr Dunne welcomed the congregation. They knew everyone by name and it seemed as if they wanted to make sure all the family was safe inside.

The Church building served many purposes then. When the partitions were put up it became a very busy meeting place for the parish as a whole. Sometimes there would be three different activities in progress — the newly formed Folk Group Choir — a Speech and Drama Class — or a committee meeting for one of the various activities in this ever growing community. 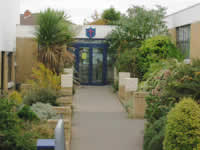 St Colmcille’s Primary School was purchased for the Parish by the priests of Ballyroan at a cost of £36,000, the sum of which became our parish debt. Government Grant and Approval was given and in September 1976 the school opened its door to the first pupils. Mr Patrick Kelly was appointed Headmaster. The total number of students on that September day was 86. Today the population has grown so large that the school has been divided into a Junior and Senior section.

Fundraising for Parish Development began in November 1974 when the Fundraising Committee launched the Envelope Collection which is still in operation. Volunteers agreed to collect envelopes weekly in different areas and as the community grew, more collectors were obtained to cover every household in the parish. This and many other funds raised by parish groups in various ways, contributed to the clearance of most of our parish debts.

In 1979, plans were well under way for the building of our permanent Church. It was also the year when Pope John Paul II came to Ireland and on the occasion of his visit to Maynooth, His Holiness blessed the Foundation Stone of our new Church. In April 1980 our beautiful new Church of St Colmcille was opened. We belonged at last. 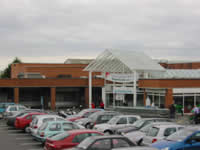 1980 is also remembered for a very special event in our history. It brought Superquinn to Knocklyon — our very own Supermarket. With it came a small Shopping Centre. No more long car journeys. No more tired feet. Just up the road or the pedestrian way. Oh the bliss of it all! During the seventies and eighties many new Estates were established — Templeroan, Orlagh, Woodstock, Castlefield, Westboume Lodge — to name but a few!

In 1989 we had the opening of The Youth and Community Centre. This was surely one of the most important additions to our community. It was opened as a result of a large Fundraising effort by a dedicated committee, spearheaded by Liam Mongey and assisted by Paddy Collins, Cormac Nagle, Michael Coleman and Con O’Grady, among others. The Youth Club, which was founded by Tony O’Connell and Liam Mongey in 1977 (with twenty members) now had a permanent home. The Centre has proved to be a wonderful asset to all the people of Knocklyon — young and old. It also caters for such Groups as K.A.I.E.S. (a great centre for Adult Education), Speech and Drama Classes, The Social and League Badminton Groups, The Lyon’s Den – after school Childcare Service, The Active Retirement Group, and many more social activities – there is even a Coffee Dock.

No one can say that Knocklyon is short of amenities. In 1991 we welcomed the Post Office to our midst. 1990 saw the first double decker bus route from Scholarstown Road to the City Centre. 1993 heralded the opening of our own Credit Union.

Now in 1999 we are happy to celebrate the Silver Jubilee of the foundation of our Parish. Looking back it is hard to imagine how quickly the years have slipped away since the first Carmelite priests came to Knocklyon. We are very grateful to them and their successors, and to all the people who have worked so hard to build Knocklyon into the community that it is today.

This article, by Eileen Casey, is reproduced from the Knocklyon News Silver Jubilee Edition, June 1999.

The addition of porches to the church structure changes the external appearance of the parish church. A bronze scupture of St Colmcille hangs inside the main entrance. These photos were taken in the summer of 2010. 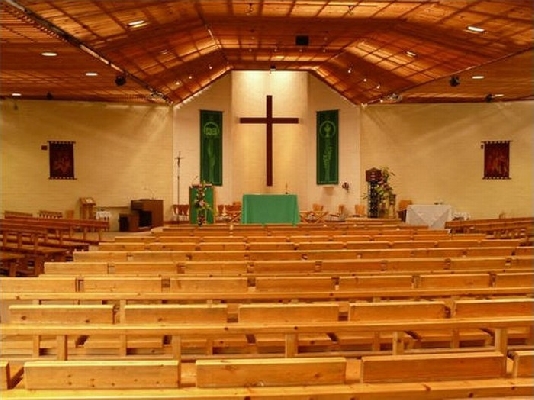 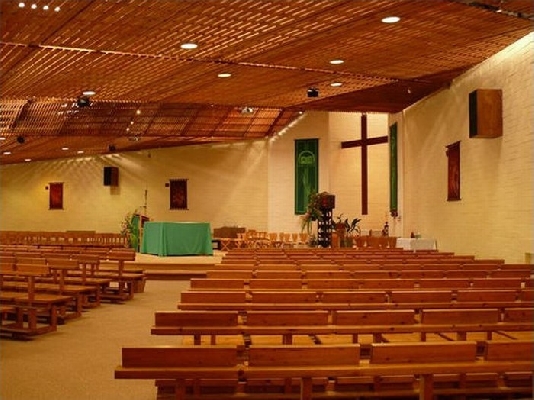 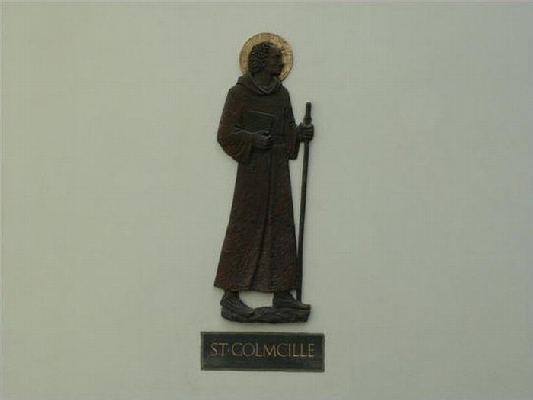 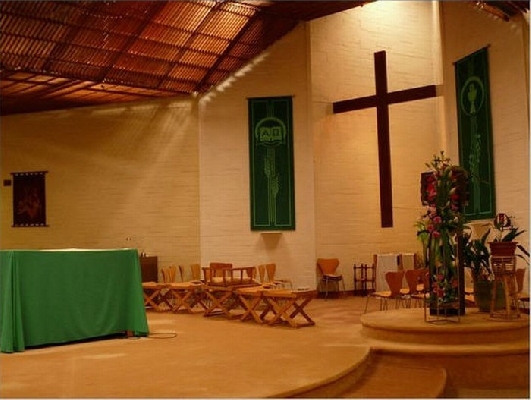 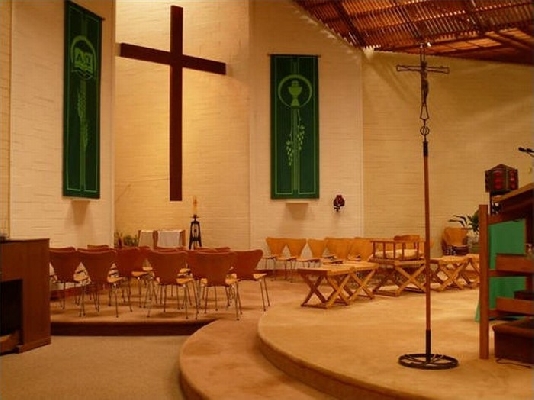 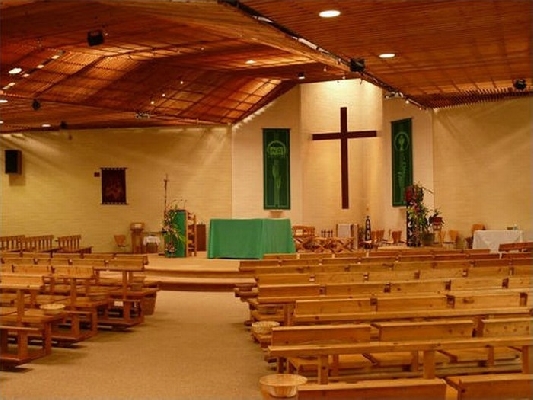 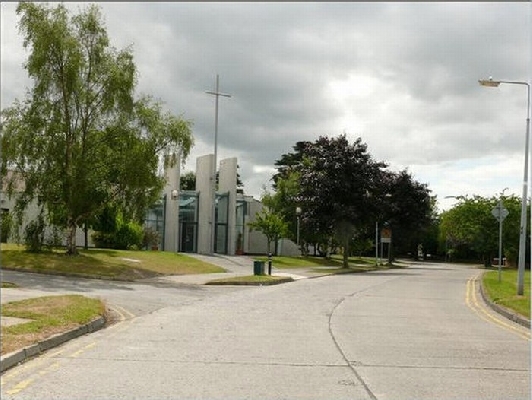 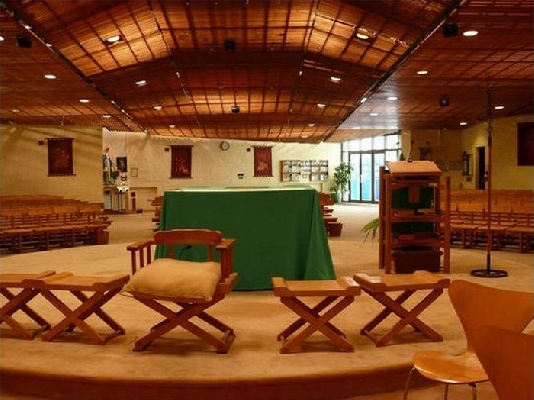 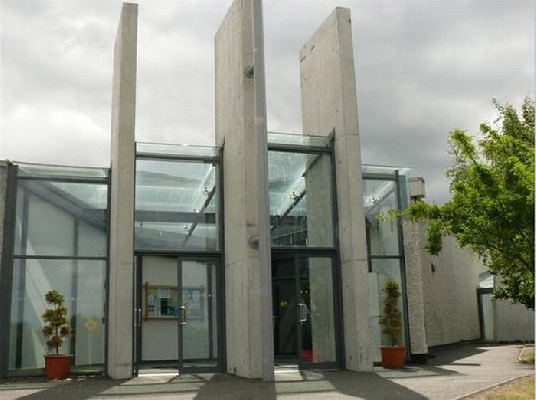